When you look at a car such as this, what are some of the images that come to mind? Some people imagine an iconic figure, such as Steve McQueen, Paul Newman, or James Dean. Others simply imagine the spectacular promise of a full tank of gas, combined with everything the open road has to offer. Others simply see one of the most extraordinary machines ever built. Regardless of what you ultimately see, this art is perfect for those who love vintage roadsters. This classic car art is available as wall art, in the form of a t-shirt, or across numerous interior products.About the car: The Mercedes-Benz 300SL (W198) was the first iteration of the SL-Class grand tourer and fastest production car of its day. Introduced in 1954 as a two-seat coupé with distinctive gull-wing doors, it was later offered as an open roadster. Built by Daimler-Benz AG, the direct fuel injected production model was based on the company's highly successful yet somewhat less powerful carbureted overhead cam straight 6 1952 racer, the W194. Immediately successful and today iconic, the 300SL stood alone with its distinctive doors, first-ever production fuel-injection, and world's fastest top speed. The original coupé was available from March 1955 to 1957, the roadster from 1957 to 1963. A notably smaller, lighter, and less luxurious 1.9 liter roadster was introduced in 1955 as the 190SL. Both the 300SL and the 190SL were followed in the Mercedes line by the 230SL. Today's 571 hp (426 kW), nearly 200 mph (320 km/h), gull-winged Mercedes-Benz SLS AMG is regarded as the 300SL's spiritual successor. This model is a sort of rat-roadster made in Germany. .

BUY THIS PRINT AT 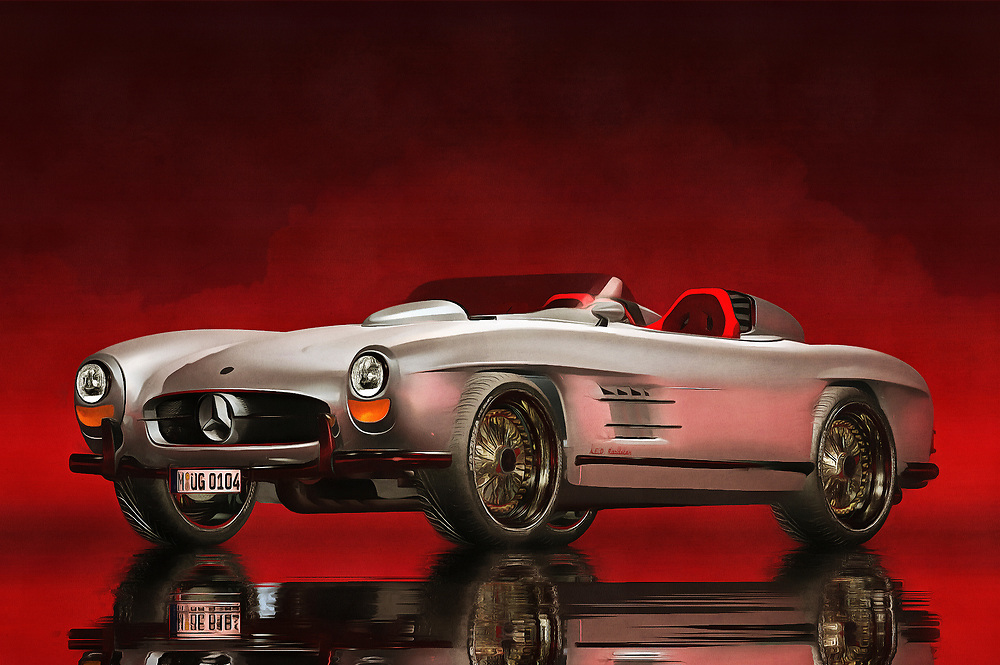